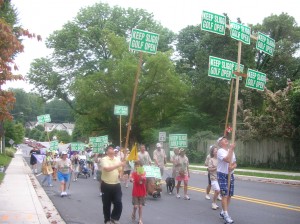 Sligo Creek Golf Course is growing so popular that it’s hard to believe that we once had to fight to keep it open. But we did.

We protested. We marched. We wrote. We testified. We put up 1,000 yard signs. And we saved Sligo Creek Golf Course. The story of this grassroots effort would be amazing if it ended there, but it didn’t.

Until 2006, Sligo Creek Golf Course was one of four golf courses operated by the Parks Department in Montgomery County while five other courses were operated by the Montgomery County Revenue Authority. Alarmed at tax subsidies for the Parks courses, the County Council that year put the four Parks courses under the Revenue Authority, where the cost would be borne entirely by golfers. A provision — later deemed illegal by the state attorney general — allowed the Revenue Authority to close any of these four courses and return them to Parks.

The Revenue Authority proposed transforming Sligo into a Par 3 course built around a double-decker, lighted driving range. This was opposed by neighbors, Friends of Sligo Creek, and many golfers. So in 2009 the Revenue Authority sought to close the course and Parks began planning other uses.

More than 100 golfers, neighbors and environmentalists showed up at a Park and Planning Commission hearing to protest and within a week formed the Sligo Creek Golf Association. Save Sligo Creek Course  signs soon peppered down county lawns.

Fortunately, County Executive Ike Leggett and the County Council listened. They agreed to provide bridge financing while a task force studied options. The task force didn’t solve all the problems. Sligo needs a new clubhouse with handicapped accessible bathrooms and an upgraded irrigation system. But out of the discussions the Revenue Authority, to its credit, agreed to keep operating Sligo under a lease with Parks with some changes, including closing the course from December through February.

But the work of the Sligo Creek Golf Association was only beginning. We decided to put our money where our mouth had been. We formed a nonprofit corporation to raise funds for course improvements.

Through our tournaments and donations, we have raised and spent almost $70,000 on the golf course, replacing sand traps on seven of the nine holes and building a new forward tee on the 7th hole. We bought rental club sets for the golf course. We helped bring First Tee back to Sligo to help build a new generation of golfers. And we’ve planted flowers and trees on the course.

Today the Parks Department and the Revenue Authority have become our partners. Groundskeepers and crews have put Sligo Creek Golf Course in the best condition in years. Manager David Degirolamo has upgraded Grill offerings and brought new promotions to the course.

But we won’t rest until the future of Sligo Creek Golf Course is absolutely assured. 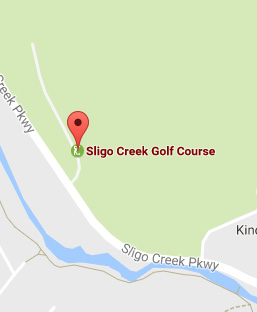